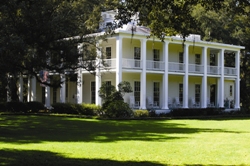 The estate was bought in 1963 by Lois Genevieve Maxon, who restored the mansion in antebellum style and planned the gardens which enhance the lovely natural setting. Built in 1895 by lumberman William Henry Wesley, the house had elaborate Victorian trimming. The restoration fulfills a local legend which claims that the original design was inspired by an antebellum plantation house where the builder was given shelter on his way from the War Between the States.

Wesley's lumber partner and father-in-law, Simeon Strickland, had an identical house nearby, of which a portion still stands. Traces of their mill, where lumber for the two houses was cut, may still be seen on the Eden grounds.

Given to the Florida Board of Parks and Historic Memorials in December 1968 by Lois Genevieve Maxon in loving memory of her parents: Harry Russell Maxon 1883-1960, Lois Adelheide Gustava Margarethe von Purucker Maxon 1888-1960