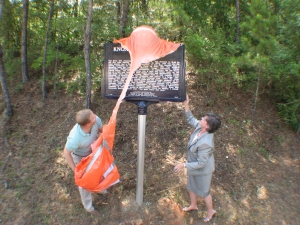 The Knox Hill Academy, a boarding school, was founded in 1848 by the Rev. John Newton (1814-1871), a Presbyterian minister whose motto was "You must learn and obey." The school was first located near a spring northeast of the Morrison Place on Knox Hill. The original sponsors of the school were the Campbells, McLeans, Gunns, Morrisons, Gillies, McCaskills, McPhersons, and McDonalds.

The new school replaced the log Henry School House. The first building was a split-log house built on top of a hill; the school was furnished with single desks and blackboards. Slates and chalk were used for writing. Between 84 and 100 regular pupils attended.

In January 1859, the academy was moved to a large, two-story frame building north of the original site. Classes for older students were held on the second floor, and the younger students had class on the first floor. The building also housed a laboratory for chemistry and physics.

The Knox Hill Academy was highly acclaimed, and it provided education to students from west Florida and southern Georgia and Alabama.

Rev. Newton closed the school in 1871 and moved to Mary Esther, where he opened another school.